Quora is a question and answer site that’s trying to be a better Yahoo Answers. Which is not very hard. Here’s some typical content on Yahoo Answers:

There is no way that question would get 39 different responses on Quora. It’s a site started by Harvard people, so you know they try to keep it classy.

There are some really cool people writing answers. NBA owners, hedge fund gurus, the founder of Wikipedia, and famous writers all use the site regularly. But, some of my favorite answers are from unknown people with specific passions. I particularly enjoyed this dope original artwork satirizing modern life, this surprisingly entertaining explanation of what happens when an airplane takes off  and this thought experiment on how an evil genius could take over the world.

The best part is how you don’t feel like you’re wasting your life when you procrastinate on Quora, as opposed to Facebook. Elon Musk’s wife is not on Facebook talking about how Elon treats his women like they’re robots to be judged solely on their utility. It sounds like Elon would have replaced his ex with an efficient, all-electric version if that were possible. Instead he just upgraded to a younger, hotter actress.

I write answers on Quora now and then. This one, about a time in my life when I felt like a failure, really struck a chord. It has now been viewed about 460 thousand more times than anything else I’ve ever written. I also write about basketball and talent agencies, as usual.

That’s it. I’m not a Quora shill getting paid to say any of this. I just like the site and wanted to give a quick shout out to my fellow Quoraians, including some person named Avery Hemming, who tried to bring a bit of Yahoo Answers flavor to the site when she asked me this gem of a question:

My answer is ALL OF THEM. If anyone can do it, you can Avery. 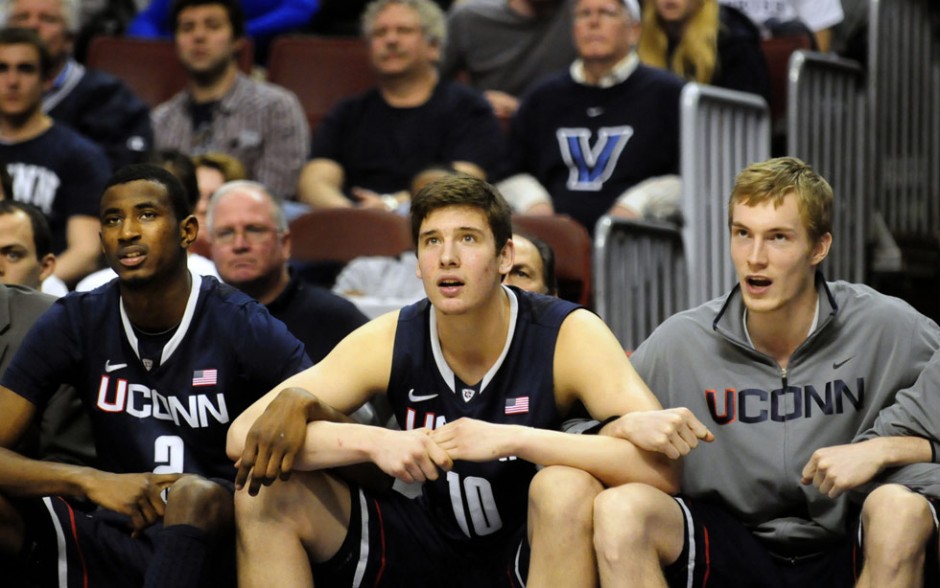 During the second half of my second year in Israel, I was relegated to the bench. I wasn’t a sixth man. I was the last man. Well, maybe I was just above the 17-year-old who was in the army and was only there half the time. But I certainly wasn’t playing.

I’d never been a bench warmer. While it was miserable at the time, I learned a lot. Like how sometimes you just have to deal with an “unfair” situation. You have no right to become an obnoxious, negative, sarcastic practical joker just because you think you’ve been slighted. That’s a good way to make a lot of enemies.

Here are a few other things you never want to do as a bench warmer:

1. Don’t mope through the entire pre-game warm up routine. Getting the ball-boy to play one-on-one with you instead of doing the team mandated defensive slides is a sure-fire way to piss of the fitness coach. The fitness coach might look like a caricature of a caricature of an 80’s workout video instructor, but the real coach actually listens to him. (even though he almost always has a very high IQ when it comes to soccer and all our drills had more than a striking resemblance to what I used to do during 3rd grade AYSO practices.) Your insolence will only put you further from your playing time goals.

2. Don’t sit on the bench and root for your teammates to fail. It seems obvious, but this was a hard one for me. I always assumed I’d be the towel waving type. The guy who makes up cool moves and goes crazy after every play and gets on TV at the NCAA tournament because of my infectious enthusiasm.

I was the exact opposite. I would sit with a scowl on my face, arms crossed, just hoping that the person playing ahead of me would screw up. After every turnover I’d turn to my (equally disgruntled) buddy and make a comment. Usually way too loud, and along the lines of “good thing coach is leaving Avi in the game. He usually figures out the rhythms of the defense after his 7th turnover.”

I have newfound respect for the guys who stay engaged and enthusiastic while riding the pine. It’s the noble way to go, but man is it hard.

3. Don’t have an inside joke with your bench warmer friends where you lock arms during free throws that don’t matter. It’s funny, but only once, and only to you guys. It is pretty much flipping the middle finger to your coach. It also can lead you to spill a Gatorade all over someone who is much bigger than you if they are next to you and you forget they are not interested in this little game you play. Telling him that you were just trying to “lock arms in support of the team” will not be convincing after he looks up and sees it’s a twenty point game. I gave it up after that incident. Any further arm locking from our lackluster crew looked more like this pathetic effort from UConn. 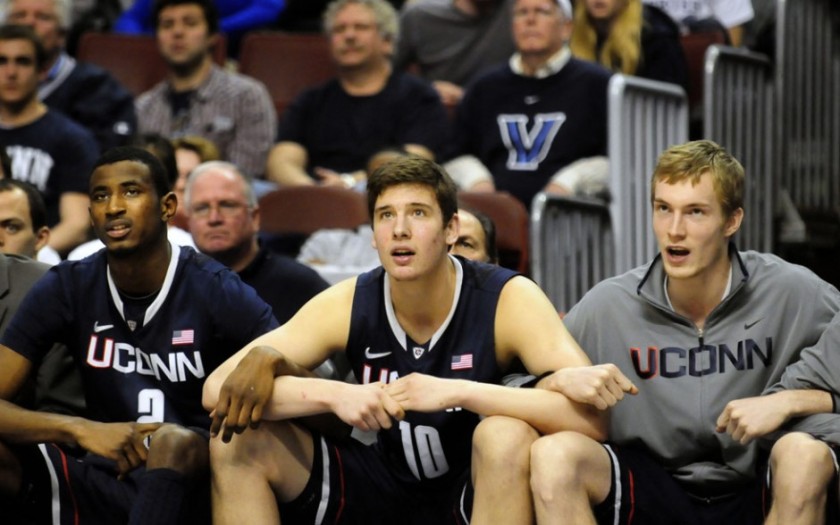 That guy on the left is praying for someone to tear their ACL so he can get some run. He looks like a bride who got cold feet at the wedding and doesn’t want to get walked down the aisle. Get it together, Huskies.

4. Don’t treat every practice like a game seven just because you think it’s how you’ll earn playing time.

While Israel was the first time I was a true benchwarmer, I did come off the bench quite a bit during my senior year of college. And when I was with the have-nots during practice, every now and then we would start lighting up the first teamers. This would happen most often when the starters were working on their zone defense. That’s when the the trinamic trio was made up of me, Dan and Alec would start blitzing them.

Dan, Alec and I all have our limitations as players, and there was a reason we didn’t play forty minutes a game. But we can all shoot pretty well, and holy shit did we make a good partnership attacking a zone. We used to murder. Just three after three after three. Every time we’d work on zone, the trinamic trio would go bananas. I’m serious. We had a (admittedly self proclaimed, but it stuck) nickname for crying out loud!

I remember one practice where it got so bad Coach Amaker switched his whole demeanor about what was happening. He went from being upset with the first team for allowing so many points, to extolling the second teamers, imploring us to continue the onslaught so as to humiliate the starters as much as possible.

But, did the trinamic trio ever play a single minute together in a real game? Nope. What if the other team was playing a zone and we were struggling to score? Coach Amaker must have unleashed that proven three headed- monster of sheer deep-bombing awesomeness, right? Never once. Because coaches stick to a script, and what happens in practice never matters as much as you think it will.

So, if you’re one of those guys who psyches himself up to the point of being nervous about practice, like I was, you need to calm down. At a certain point, things are going to be as they are going to be, and no amount of screaming at an assistant coach for blowing a call during a scrimmage is going to get you on the court. You’re going to stress yourself out. Do your best and let the chips fall as they may.

I have a special place in my heart for all the bench warmers out there. I know how much it sucks, and how you’re so much better than that asshole who took your minutes, and how good it can feel to smile to your nemesis fail in a big moment. But it’s just not worth the mental effort. I spent so much time being mad at my coaches and my teammates and my self that I barely ever stopped to take a breath. I wish I would have looked around and gone “huh. It’s pretty cool that I got into the best school in the world because I can put a ball through a hoop. It’s also cool that I got to travel internationally, make amazing friends, and get paid to put a ball through a hoop. Sure is nice.”

And if I could go back, that’s exactly what I’d do. Having had recent back and ankle problems, I realize that being able to play at all is a blessing.

Bench warmers of the world, don’t seethe after your team hits a big shot, because that should have been you in the spotlight.  Drop your ego, cheer and play the shit out of your air guitar if you want to. I promise you’ll have a lot more fun.

About a month ago, I decided that I was moving out of Los Angeles. Everyone I’ve told has been surprised. The surprise turns to shock when I say I’m moving to Wisconsin.

The bewilderment stems from the fact that people in LA know the following things about Wisconsin:

You can see how convincing people of Wisconsin’s merits is an uphill battle. I wouldn’t move there if I thought all I’d be doing is shivering in my apartment, watching football, pounding string cheese and keeping an eye out for serial killers.

But, even if it wasn’t Wisconsin, I’d still be moving. So before I extol the virtues of the midwest, I’ll talk about why I’m leaving in the first place. END_OF_DOCUMENT_TOKEN_TO_BE_REPLACED 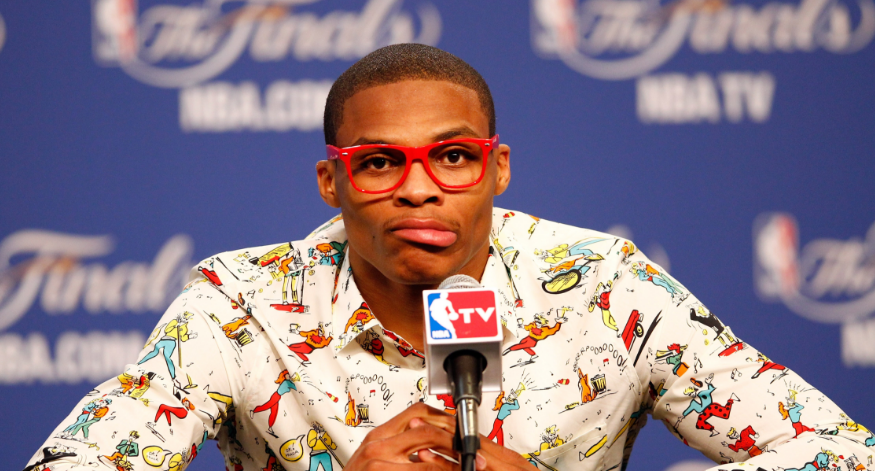 The NBA media can’t shut up about Russell Westbrook’s recent run of play, and for good reason. He’s a beast. His body parts keep exploding, yet he keeps coming back stronger. The basketball gods said “we’re going to ruin Derrick Rose and Westbrook. They’re too good. And we’re assholes.” Rose went down, but Westbrook threw up two middle fingers and continued to rampage through the league. He’s a monster. One of the best players in the league. Yet, he still makes plays like this:

There he is, throwing up an airball. It happens, even to the greats. Thankfully for the Thunder, Enes Kanter grabbed the rebound and put it back in. OR DID HE.

END_OF_DOCUMENT_TOKEN_TO_BE_REPLACED

In the next few weeks, I will apply to the HarvardWood mentorship program. HarvardWood may have the douchiest name of any alumni organization in existence, but it’s a great resource for the struggling writer. Not all Harvard grads have instant success when they set out to find a job in the arts. For every B.J. Novak…

END_OF_DOCUMENT_TOKEN_TO_BE_REPLACED

How to get through the day when you work at Hollywood talent agency:

END_OF_DOCUMENT_TOKEN_TO_BE_REPLACED

My Thoughts On Everything
Create a free website or blog at WordPress.com.